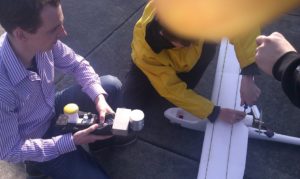 Here you can see, the exciting start of this challenging project to get a ‘swarm’ of unmanned robotplains up in the air and have them trace any reported fires. FireSwarm is a project initiated by Almende, DevLab, KITT Engineering, TU Delft, State University of Groningen, EagleVision, Fire-brigade Bergen and the Safetyregion North-Holland-North.
Little cheap plains are equipped with different sensors (for carbon monoxide, temperature for example) and camera’s. The project focusses on smart image-and pattern detection techniques, with which the system itself can actually recognize and localize fires.
Furthermore the challenge is to learn these little robot plains to fly in a swarm, as it is impossible to control them one by one by hand.
In March 2012 the first test flights took place. During these flights the sensors were tested on their ability to recognize fires. Different objects were used like a car with the motor running, a barbecue and an open fire. As such their distinctive ability was tested. http://www.youtube.com/watch?v=4a6uVBEsKZQ The following sensors were tested:

During these test flights the UAV flew at various heights, to measure the influence of the height on detecting fires. The FireSwarm project is subsidized by the Dutch Agency on Innovation Social Security.

IT’S ALL
ABOUT THE
QUESTION