It’s been 1,5 years since KITT Engineering and Yalp won both the international and local award (Delft) of the ProFit innovation competition with their concept ‘Serious gaming’. Meanwhile a lot has happened: brainstorm sessions about games with industrial design students, a first prototype, research about the movement intensity with children from the primary schools in the neighbourhood, etc.

The final design of the concept ‘Serious gaming’, which is now called Yalp Memo. The Memo was developed by KITT Engineering for active gaming company Yalp. The interactive playground set motivates children to exercise and it helps them learn to work with others and develop both physical and cognitive skills. The Memo also makes lessons fun and dynamic and introduces a social element to learning. The playset can be used to help kids improve their language skills, learn math and develop social skills. The element of competition and the excitement of play engage children in different games, turning both exercise and learning into activities they look forward to. There are four games available with the system and players can easily select the one they wish to play on the central master post. 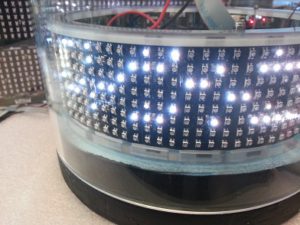 The first Memo playground set was unveiled at the Julianaschool in Rijssen, a town in the eastern Netherlands, on Thursday, October 2. The Memo consists of seven posts and a playing surface about 8 meters in diameter. The interactive playset engages children in active play using LED touch screens which light up on the posts, asking kids to run from one post to another, to touch them, run circles around them or perform similar actions in order to score points. The students at the elementary school in Rijssen will initially use the Memo in gym class and later also to learn calculus. Many studies have shown that physical activity is beneficial to learning because, with exercise, the material is absorbed faster. While the school administrators at the Julianaschool know that the Memo can’t replace traditional calculus, they are also aware of the fact that exercise can improve children’s academic performance in the long term.

The purpose of this innovation is a challenging, fun and accessible play environment for young and old which one can develop themselves physically, socially, emotionally and intellectually in a playfully manner. Think of games where you learn skills like math, language and geography, but also things like listening, balance, concentration and musicality. All this in a physically challenging setup. It has been shown that exercise is a great incentive in the learning performance. Memo includes a challenging field with seven round interactive play poles. Each of this poles has a round touch screen, which can be played by hand. The players get audio and visual feedback. You will learn without any emphasis on learning, because the emphasis in on fun.

The Memo is very easy to operate. It provides a brief tutorial at the beginning and gives kids hints and encourages them as they play. The playset can be used by players of different ages and fitness levels simultaneously, which also makes it a good choice for residential care facilities, not just schools, as it allows residents to play together with their grandkids.

IT’S ALL
ABOUT THE
QUESTION